The pitfalls of ignoring Change Management

Everyone lives, works, and interacts with a world that is constantly changing; yet, in business, roughly 70% of change initiatives fail[1]. Infosys Consulting was retained to help rollout a new cost tracking and forecasting tool; the rollout ended after eight months in failure due to improper handling of change. There are five often-cited reasons why change initiatives fail: failure to instill enough urgency, not building a strong enough leadership team, an unclear or general lack of vision, a lack of communication of the vision, and failure to remove impediments blocking implementation of the vision[2]. Of these five reasons, the client fell into the last bucket: failing to remove impediments. Business leaders did not understand how their employees performed their jobs – their needs, wants, blockers – and, despite pleas throughout the process that this lack of understanding would hurt the rollout, refused to respond to these warnings. As a result, failure to remove impediments undermined the beneficial change work done on the program, ultimately leading to abandoning the change initiative and returning to legacy procedures. 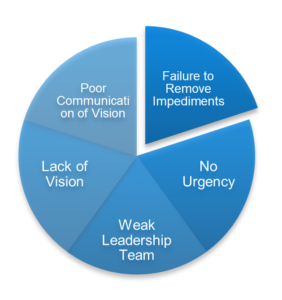 Pushing change without managing the change properly greatly increases the chance for a failed change initiative regardless of the anticipated benefits of the post-change state. In the face of a large change initiative, client leadership diminished the importance of change management personnel and risk awareness, preventing support in identifying and removing impediments to the change initiative.

The client wanted to rollout a new cost tracking and forecasting tool to empower end-users to ditch cumbersome and error-prone offline spreadsheets in favor of a one-size-fits-all tool. Much of the client’s behavior conformed to change best practices. The new tool addressed a legitimate business need, which laid the predicate for strong buy-in. Senior leadership pushed the tool aggressively, which created urgency and made the initiative extremely visible to end-users. Inherent in the development of the tool and the marketing of it was a clear articulation of the vision of moving away from offline spreadsheets and into an integrated tool. Why then did it fail?

Rigid client leadership diminished the role of change management and failed to adapt as necessary.

Change management’s entire purpose is helping facilitate change within an organization. Yet, in a rollout that involved over sixty people (including business leadership, end-users, change management, and the implementation team), there was only one change management person.

In fact, throughout the eight-month deployment, the implementation team (where Infosys Consulting resided) specifically raised the risk of the lack of change management, but was disregarded by client leadership. Client leadership’s go-it-alone approach focused more on perceived progress towards completion, while ignoring as-is processes, failing to define to-be processes, and forgetting to engage with end-users to understand the impact of the implementation on them. The one change management individual tried to facilitate networking between all stakeholders and proactively drive cross-team communications. Unfortunately, they were told to instead focus on instructional materials and setting up the tool-specific SharePoint site.

Post-kickoff, end-users, who preliminarily were excited for a tool that would remove the tediousness of offline cost tracking and forecasting, quickly realized that the tool was an extreme departure from their ways of working. In fact, the tool was based on a fundamental misunderstanding of how they did their job. Most stark was the realization that the tool was not built to accommodate an entire segment of the business. The response was immediate and overwhelmingly negative. Attempts to salvage the situation involved an enormous amount of rework, inconsistent ad hoc messaging, and frustration from all parties; unfortunately, they were not enough to remedy the end-user resistance and the tool deficiencies. In the end, all parties agreed the deployment did not work and the business reverted to pre-deployment procedures. Ultimately, the client did not properly respond to impediments to a successful rollout and, instead, succumbed to them.

Sachin works with large oil and gas companies in the upstream, midstream, and downstream areas to frame their digital strategy across customer and employee experiences. He helps his clients quantify value beginning with industry opportunities and ending with decisions built with big data, analytical tools, and visualizations and narratives. His current focus is digital data monetization, where he helps companies put a monetary value to the data that is used to execute their digital strategy. Sachin has an MBA from the University of Michigan. 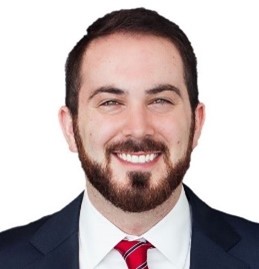