Can We Afford to Ignore the Blockchain ‘Bubble’ in the Energy Sector?

As long as it has existed, modern capitalism has experienced a series of “bubbles” as investors rush to grab a slice of a new market that they don’t fully understand. From the tulip craze in the early 18th century to the dotcom crash that marked so many of our formative years, there are certain patterns evident in most, if not all, of these bubbles.

One of these is the prevalence of dealers preying on investors’ ignorance and encouraging people to part with their money with no guarantee of a return on investment. If that sounds a little like the current “blockchain bubble”, you’d be right.

Blockchain has generated interest far in excess of its ability to deliver effective, marketable services. And that’s a great shame, because, blockchain truly has the potential to revolutionize a huge range of industries – not least the oil and gas sector.

Key to realizing this potential is cutting through the blockchain hype and looking at how the technology can answer some of the industry’s biggest and longest-standing challenges.

The Business of Blockchain

Blockchain, in most people’s eyes, is inseparably linked to cryptocurrencies like Bitcoin; its somewhat ‘shady’ origin has probably played a part in delaying its application in the world of business. That has all changed in the last 12 months, with blockchain becoming big business. But at this early stage, it’s difficult to distinguish poorly thought-out blockchain-based services from the genuinely effective ones.

When we grapple with the blockchain bubble, the first step must be to understand what it is. Klaus Schwab, the founder of the World Economic Forum, describes it as “a shared, programmable, cryptographically secure and therefore trusted ledger which no single user controls and which can be inspected by anyone”. Schwab points to a survey of 800 executives which found that almost two-thirds believe that by 2025, up to 10 percent of global GDP will be stored using blockchain technology.

The oil and gas industry is struggling to cope with a host of new challenges, many of them related to the huge explosion of data in recent years.

These include managing the complex, document-intensive processes used in energy transactions; the adoption of the Internet of Things (IoT) throughout the industry’s supply chains and infrastructure; cumbersome and inefficient transactions in global energy markets; the ever-growing volume of increasingly-sophisticated cyberattacks; and a more complicated regulatory environment.

Blockchain can bring transformative solutions to many more problems. These include:

But these benefits aren’t just in the pipeline. Many oil and gas enterprises are already using blockchain to achieve significant advantages – including a much sought-after return on their blockchain investment.

We could gush all day on specific blockchain applications for the energy sector, but one good example is in the field of energy trading. In 2017 Natixis pioneered the first blockchain solution designed specifically for commodity trade finance in the US crude oil market. Blockchain’s distributed ledger model makes it ideal for digitizing transactions, ensuring enhanced security, significantly better efficiency and improved transparency.

With both buyer and seller along with their respective banks on the same ledger, everyone has full, real-time visibility of transaction data, from trade initiation to final delivery. This fully transparent process eliminates the opportunity for fraud and reduces the threat of tampering and other cybercrimes. Companies can also benefit from lower overhead costs, reduced cash cycle times and fewer intermediaries.

While systems like these are already proving their worth, the industry at large is still stuck in a pre-digital world of time-consuming manual processes, where parties must rely largely on trust, providing a fertile breeding ground for fraud.

Recently, energy giants BP and Shell led plans for a blockchain-based platform for energy trading which is expected to come online by the end of the year. Other major oil firms and trading houses such as Statoil, Société Générale, ING and ABN Amro have also come on board; thus, we face the prospect of a revolution in the way that energy is traded across the world. This requires all parties to get off the fence and decide how many resources they will commit to implementing blockchain technology.

Potential blockchain applications do not end with energy trading. By providing a single, transparent and unalterable record of documentation and transactions between parties, blockchain will have a transformative effect on everything from managing exploration acreage records to equipment maintenance scheduling.

Two countries with high levels of disputed land ownership, Georgia and Ghana, are already using blockchain to record sale and transfer of land, and so creating an immutable audit trail of ownership. Meanwhile, blockchain promises a way of solving the complex and incredibly data-intensive challenge of managing the huge increase in connected devices throughout oil and gas infrastructure, and the data they produce.

In fact, the benefits of blockchain are almost without number, flowing both upstream and downstream. Upstream applications include design and construction of wells and related facilities, checking equipment maintenance history and tracking well samples. In the midstream, it can bring tremendous benefits in joint ventures, risk management, contracting and regulatory compliance. Finally, by adopting consortiums and shared ledgers, distributed ledgers can bring greater efficiency and transparency to downstream activities such as exchange of products, secondary distribution, demurrage and claims management.

For a new technology that’s more talked-about than actually encountered, blockchain deserves to be considered more than just another bubble. Even if a crash arrives in the same vein as the dotcom boom, it will most likely lead to a more sensible understanding of blockchain’s capabilities. When the bubble burst, it didn’t rob us of Amazon or Google, Microsoft or Facebook, and nor will any similar blockchain crash negate the fact that this technology is here to stay. Now, we’re just waiting for energy firms to take advantage. 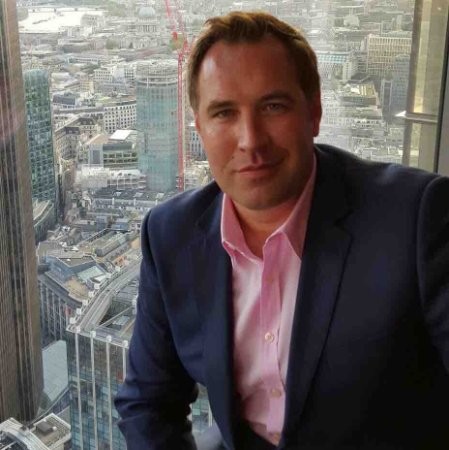 Simon is the Europe energy partner for Infosys Consulting. He has over 15 years of experience running high performing transformation teams in oil and gas globally. Simon has previously held Consulting partner roles at BP, Shell, Cofco and Tullow Oil, running large teams that discover, value and deliver business transformations for both domains (downstream, shipping, trading and upstream) and functional areas. Simon started his career at Siemens in Germany, specializing in mergers and acquisitions for the conglomerate, before moving to PricewaterhouseCoopers, IBM and Infosys. Simon holds 2 degrees, one English and one German, specializing in strategy and business studies, and currently lectures at the University of Cambridge in strategy implementation.